As it is now, this blog is currently the artifacts and outlines of two blog idea that I think is better put together. Disjointed in the middle, but coherent enough to see that there is some reflection about technical documentation, and the actual documentation after that.

I think it’s good to put here as a sort of snapshot in time of a problem and how I solved it. The problem was me not deeply understanding the code architecture of a project that I was working on.

I set out to deeply solve this problem. I chose to spend a few weeks of my spare time and devote them to fully understanding the separation of concerns that existed within the architecture.

This process itself was a massive game-changer for me. I learned that I could move mountains, given enough time and focus for my understanding to mature on its own. I learned even more how documentation of all kinds, from comments in the code all the way up to formal technical writing and elaborate sequence diagrams.

Part 1 Code example, with links to each breakdown section, with code examples for each section

the thing that I did

This is the “root” directory of the pure JS/TS logic of the application.

This is where we keep the React web components, and its stuff.

Yup, you guessed it.

Where the lowest level Data Models live, along with AppState interface and the initialState constant. The interfaces for the fields in AppState are imported from their respective modules in the same directory.

remote.ts is the Mini-me version of core facing the outside world. It only defines the basic response shapes.

walk through a monoRepo data flow 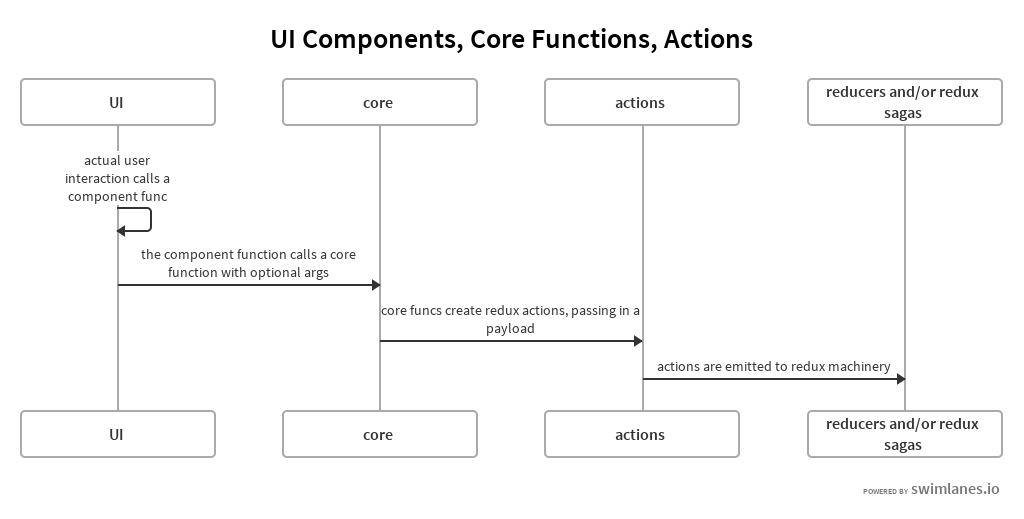 Both the above onClick and render functions will be found inside of a React.Component. Functions and other passed in values come into the component via React props, i.e. funcName. They’re then destructured and may take in possible arguments from the component function.

It is common to see a React component pass its own functions into any child components within it, in this case the confirm button receives as props its parent’s function, as this.onClick.

These are a few code examples of the third message in the flow of data: the core function inside of that UI function (in steps one and two above) creates a redux action.

A redux action returns an object with a type property, and may have other possible fields (its payload). Examples of this from above are clearData and setData. You can also each has their interface shape above it. The interfaces may be grouped as they are in GroupedDataActions, and then everything is exported.

back to section sequence diagram back to top of code examples

Redux actions are listened for in both redux reducers and redux sagas by the action type and then the payload is used to mutate state. More details will be found in the following section.

note: reducers and sagas both listen for an action’s type, then take in its payload to perform state mutations, as mentioned at the end of the previous section. 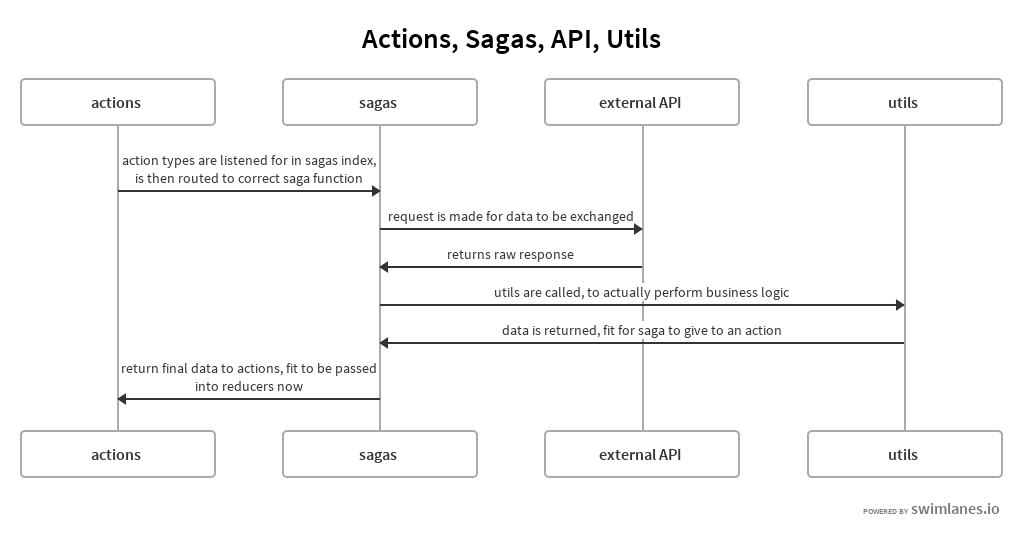 Each reducer is passed into the root reducer:

back to section sequence diagram back to top of code examples

The sagas index behaves much like a reducer in that it listens for redux actions like "HANDLE_METADATA" , and then routes that action and its payload to its callback function handleMetaData . This callback is imported from its _sagas file above the root function, so that the index can find it.

The saga functions are responsible for sending requests to the client_sagas so that it can actually make the external call, and the client.ts will introduce the incoming data into redux. TODO - client and client sagas

Saga and util functions work together to massage incoming data and changes to existing data into the data shapes that our redux app state needs, so that state can be updated and trigger appropriate changes in the UI.

back to table of contents